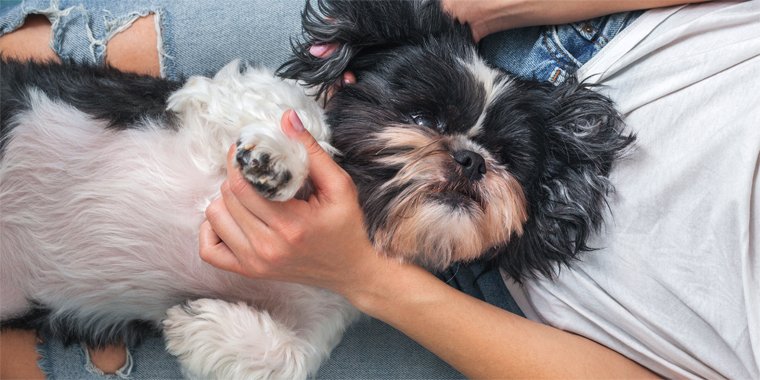 The Shih Tzu is one of the most loved breeds. Shih Tzu means ‘little lion’, but contrary to its name, this little fellow is so adorable and very easy to like even if you are not a dog lover. This breed’s irresistible charm will capture your heart. Shih Tzu’s and Shih Tzu mixed breeds are affectionate lapdogs who are outgoing and happy which makes for a perfect companion.

If you are looking for someone to cheer you up, you might want to check out this buddy’s personality profile. This breed has got five stars for being affectionate, friendly, and adaptable, making it good for beginner owners. It also got four stars for being kid-friendly and intelligent. It is also rated four for its potential for weight gain, mouthiness, prey drive, and playfulness.

However, it got very low rates for tolerance for hot weather, the tendency to bark, wanderlust potential, and energy level. You can check their complete characteristics and vital statistics here.

The Shih Tzu belongs to the small dog breed category, so it is not advisable to breed them for larger dogs. Nevertheless, there is a wide selection of Shih Tzu mixes that result in healthy, awesome dogs. Having a pure-bred is exciting enough, so what about doubling the fun with these Shih Tzu crossbreeds? 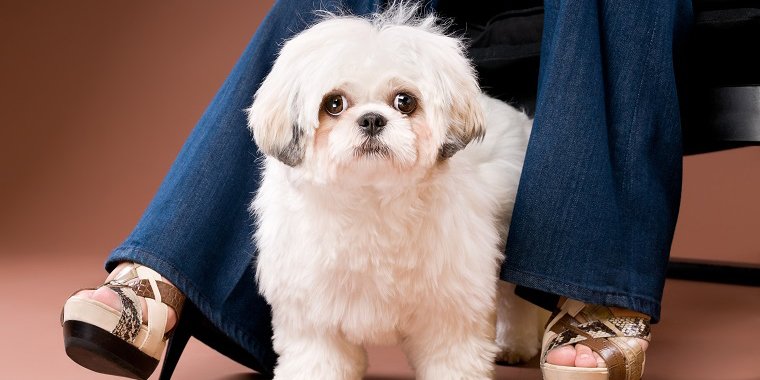 A combination of Shih Tzu and Poodle is called ‘Shih Poo’. This Shih Tzu poodle mix breed’s weight ranges from 8 to 18 pounds. Their fluffy coats often come in multiple colors; some can have white, black, brown, and brindle colors.

Like both parents, this breed will be happy in any type of household but needs plenty of attention and love. They have a high energy level and a friendly demeanor. They don’t need a lot of exercise, but they’ll love it when you walk them from time to time. 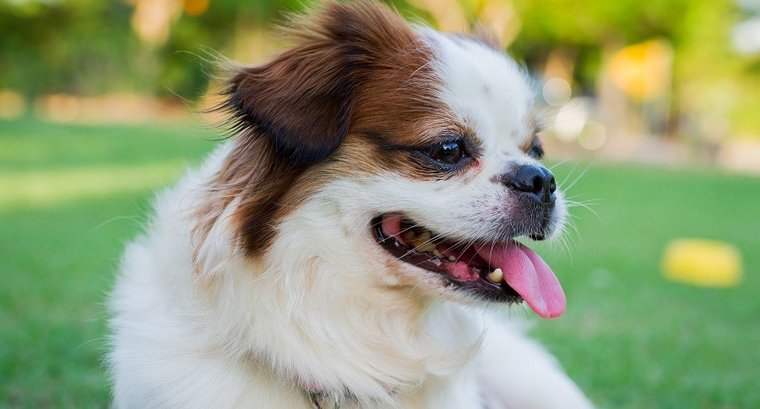 This must be the cutest combination because Chihuahua is considered the smallest breed. The Shih Tzu Chihuahua mix is also one of the most popular breeds, having a celebrity status. Their weight ranges from 3 to 9 pounds. Their coat comes in a variety of colors depending on their parents; they can be white, black, cream, brown, or combination.

A ShiChi’s big personality compensates for its small size. They are adorable little creatures that can easily get along with everyone but maybe shy with stranger children and dogs. You want to watch out because they are very playful and tend to be stubborn. Their high-pitched bark comes after their pure-bred Chihuahua parent. Give them extra time in training them to bark (since they bark incessantly) and behave properly. 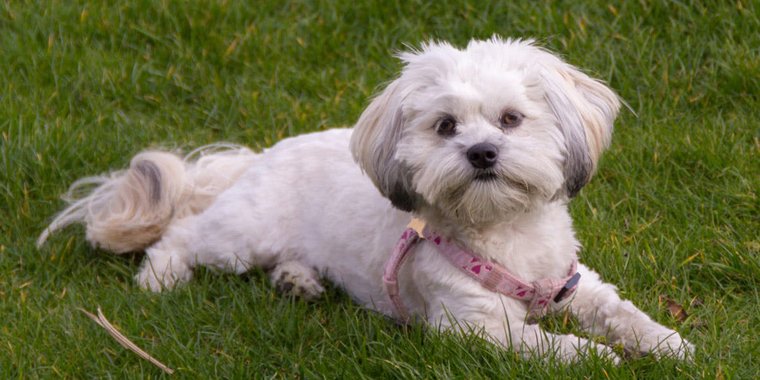 A well-mannered Maltese plus an affectionate Shih Tzu equals a very adorable Mal-Shi. This Shih Tzu Maltese mix breed will probably melt every dog lover’s heart. This adorable breed weighs between 6 and 12 pounds. They usually have white or tan color, otherwise, they can have a darker shade.

They are easy to train and get along with everyone including children. They love to just sit beside you and enjoy your presence, but they can also become playful and active at times. 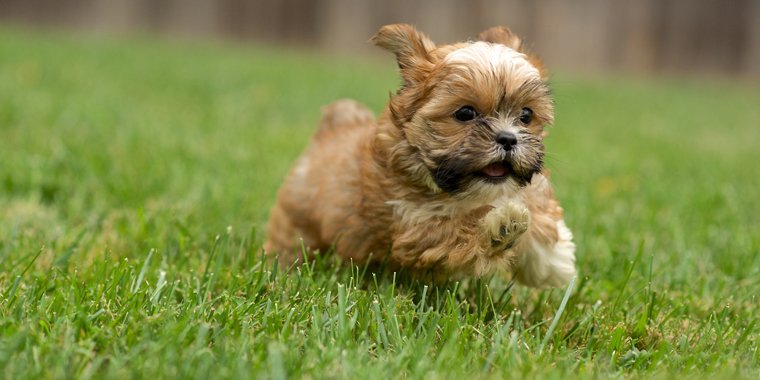 The crossbreed of York Shire Terrier and Shih Tzu weighs at around 4 to 12 pounds. Shorkies have a soft coat that varies from black and brown to brown and white.

The Shih Tzu Yorkie mix is a small breed, but they feel big – they have a big love for their owners. They are very loyal and protective so expect them to bark often. However, training them is challenging because they can be very stubborn. They don’t want to be around children, but they are good with adults. 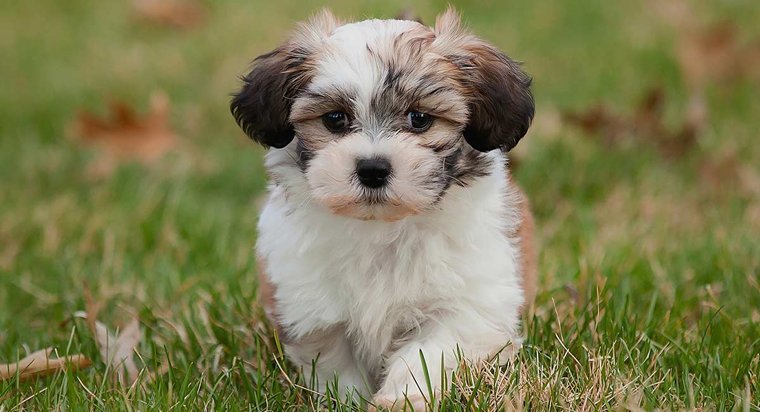 The Shichon is a mixed breed of Shih Tzu and Bichon Frise. Some dog aficionados call it the ‘teddy bear breed. They typically weigh between 9 to 15 pounds. Their most common colors are black and white, brown and white, and chocolate and silver.

The Shichon breed is popularly known as therapy dogs and emotional support pets because of their intuitive and gentle nature. They love playing with children and other dogs; they have a high energy level and love a game of fetch and chasing children. Words of caution though: Shih Tzu Bichon mix breeds are clingy creatures, so they tend to suffer from ‘separation anxiety’ every time you leave. 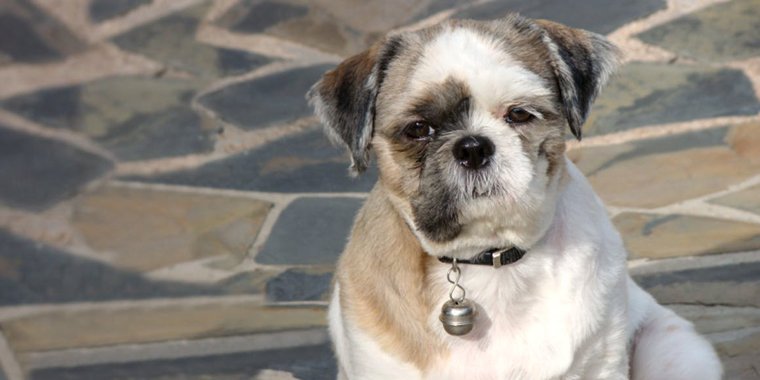 Indeed, this is a peculiar pair. Although they don’t have so much in common, the Shih Tzu and Bulldog are both brachycephalics which means they have flat faces and short muzzles. They weigh between 15-25 pounds which is quite heavy for a small breed. The Bulldog Shih Tzu mix has a short and stocky-built body.

Their hair is shaggy short to medium length. Coat color varies from tawny to mono color to two-color coats. Other possible colors include red, fawn, white, cream, black, and brown.

This odd combination of breed surprisingly came out to have a bubbly personality, thus they became a popular designer breed. They are perfect companions, very affectionate, and eager to please. They get along with older children and pets of similar size. 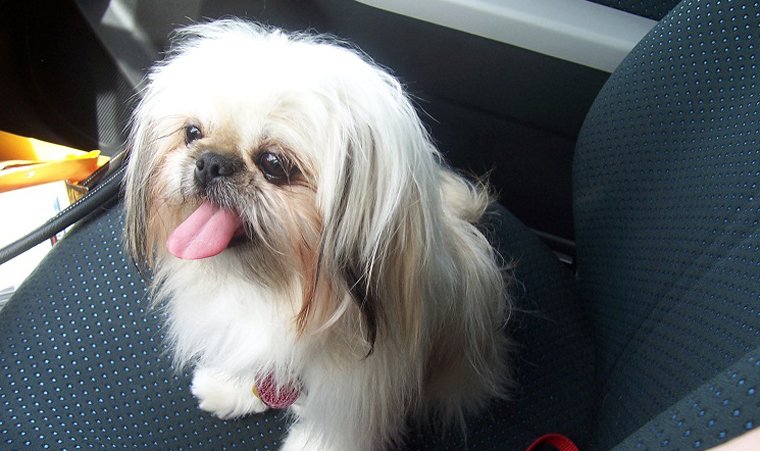 The Pekingese breed comes from a regal bearing. It is bred in China and popularly known as the companion of the imperial family. The crossbred of Shih Tzu Pikengese mix is called Shinese. They are usually flat-faced, with oval to round heads, black eyes, and long floppy ears. They weigh between 10 and 16 pounds.

Shinese dogs are independent. They love to run around rather than be carried. They are good with kids and bark at strangers. They’re extremely loyal and protective of the family members which make them an excellent guard dog. 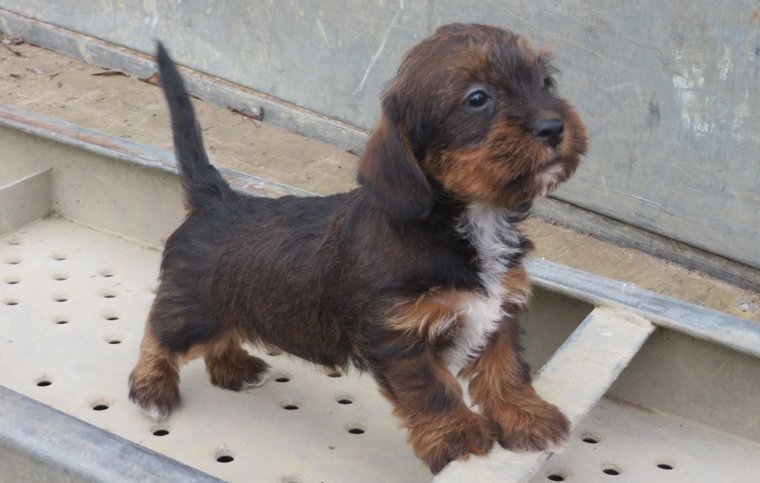 The Dachshund is one of the most popular dogs in the world. The crossbred between a dachshund and a Shih Tzu is known as the Schweenie. They inherit their height from their Shih Tzu parent but their longer body and short legs are from the Dachshund side. They are a strong pooch with broad, muscular shoulders, big dark eyes, big floppy ears, and pretty faces.

They weigh between 10 and 18 pounds. Their most common coat is rusty hue, but they can also be white/cream, light/golden brown, black and white, brown and white, or a combination of all.

The Shih Tzu Dachshund mix breeds are also an ideal family dog as they’re smart, friendly, and loving. This bunch of cuties never snap or growl aggressively. However, they are known to exhibit destructive behavior. Luckily, training Schweenies is easy because they are intelligent and obedient. 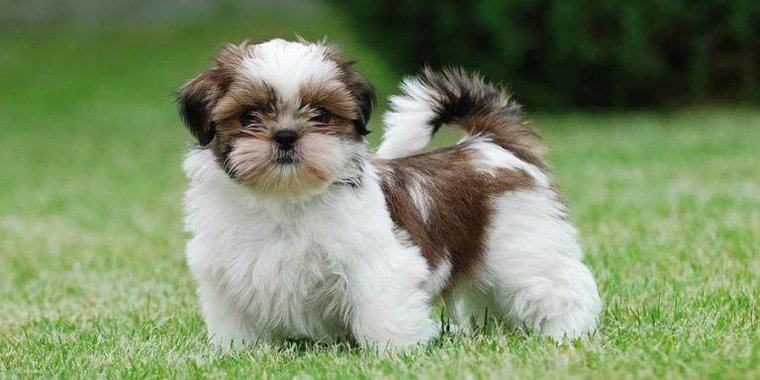 The Shih Tzu and Pitbull are odd couples that when bred together make a unique crossbreed. However, the Shih Tzu Pitbull mix’s most significant feature is inherited from the parent Shih Tzu. They have silky and fluffy fur which they took from the Shih Tzu’s genes. They get their masculine quality from the parent Pitbull. Their weight ranges from 15-30 pounds. Coat colors vary from yellow, brown, to chocolate and black.

Shih Tzu’s are lapdog while Pitbulls are independent, so their combination makes them more exciting. They are generally a family-friendly dog. But if not socialized properly, they are most likely to become aggressive and fearful.

Shih Tzu’s are an adorable breed, but they are even more irresistible when crossbreeding with other equally charming pooches.

Shih Tzu’s lineup of crossbreeds offers dog lovers a variety of personalities that would suit their lifestyle. Overall, Shih Tzu’s mixes complement the characteristics and features of the other dogs.