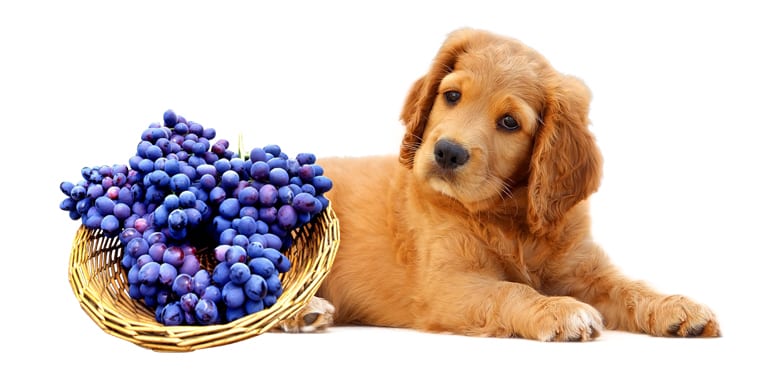 Dogs also enjoy eating foods just as much as we humans do. Fruits and vegetables can be made as a delicious and healthy treat for your furry companion. However, not all foods are safe for dogs – and grapes might be one of them.

So, can dogs eat grapes? Sadly, the answer is no! In fact, the American Society for the Prevention of Cruelty to Animals (ASPCA) included grapes and raisins among the most toxic human foods for dogs.

That said, let’s explore the reasons why they are not safe for your furry friends along with the symptoms of grape poisoning and the immediate actions you should take if your dog happened to accidentally eat grapes.

Why Are Grapes Toxic for Dogs?

The reason for the grape’s toxicity is still a mystery until now, and various seasoned veterinarians and animal care professionals have different opinions about it. Some suggest that it is due to a poisonous substance from a fungus called mycotoxin. Meanwhile, others say that it is because of salicylate, a naturally occurring substance which can hinder the blood circulation in a dog’s kidney.

Not only the exact toxic agent is unknown, but the dosage of toxicity grapes can produce still remains unsolved. However, animal care experts indicate two components that make up a grape’s noxiousness: the number of grapes consumed and the dog’s breed. Certain dogs can endure little dosages of grapes without experiencing any symptoms, but others tend to experience negative reactions immediately upon ingesting.

Are All Types of Grapes Dangerous for Your Dogs?

You might be wondering if can dogs eat seedless grapes instead? The answer is still a big NO as their toxicity still remains similar to all types of grapes.

The same goes for the question “can dogs eat green grapes?” All foods that contain currants, grapes, and raisins such as baked goodies, granola, and trail mixes can cause some health issues on your furry friend once eaten.

What Happens if Your Dogs Consumed Grapes?

Initially, within 20 to 25 hours after consumption, your dog may experience vomiting. Then, in the next 10 to 15 hours, he will suffer from diarrhea and loss of appetite. Further serious indications will occur when kidney failure develops which is usually common after 48 hours after eating grapes.

Signs of renal failure could include the following:

The most severe health complication of consuming grapes among dogs is an abrupt acute kidney failure which results in a deficiency of urinary output. In some cases, it can result in death. Even with treatment, a damaged kidney can cause a lot of suffering to your dog, so preventing it in the first place is highly vital.

What are the Immediate Actions to Be Taken?

According to studies, dogs can’t digest grapes right away, and this will give you sufficient time to give them treatment. But of course, it is better to know the immediate actions to be taken especially when your canine buddy has eaten several pieces of grapes. After all, it would be very risky for your dog’s health if there’s no first aid given after a long period of time.

Remember that it is essential for your dogs to vomit to release the grapes and the toxins. To do so, simply follow these steps:

Even though vomiting is vital and serves as first aid, don’t try it if your dog is:

Lastly, you should try it if you’re not really sure that your dog has eaten grapes.

What are Good Substitutes for Grapes Instead?

Though grapes are bad for your dog’s health, there are other healthy, delicious fruits that are safe to eat (citric fruits are excluded as they can lead to an upset stomach). Moreover, there are fruits and vegetables that are generally safe such as watermelons, raspberries, tomatoes. However, you have to keep in mind that they should be properly served and with limitations.

Here are some safe fruits you can give your dogs:

If serving these fruits for the first time, take a precaution by giving a new fruit or vegetable one at a time so you’ll know which one has a negative effect. Introducing a new fruit into your dog’s diet can possibly lead to stomach issues like diarrhea and vomiting.

You also want to make sure that all possible choking hazards are removed. This applies to some parts which are deemed toxic such as pits, skins, stems, and seeds.

At the end of the day, prevention is always better than cure. Therefore, it is strictly advised to keep your dog away from grapes and other foods that may seem quite benign like avocados. Also, if you have companions living with you, it is very important to educate them with this information to prevent your dogs from experiencing serious health problems.