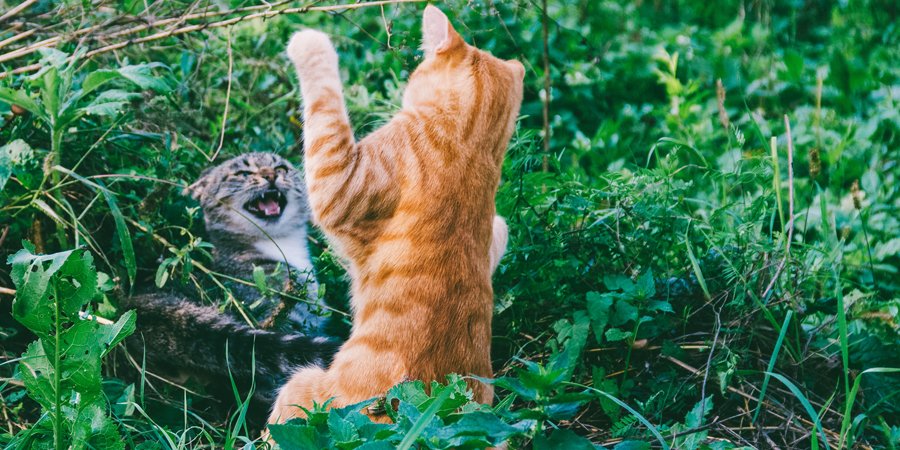 How To Stop a Cat Fight?

Cats are gorgeous, fluffy creatures that we, as humans, love to have around. They are also animals and they have fisticuffs. There’s lots of noise, and fur, and claws – it just isn’t something you want to happen nearby. Even worse is if it’s your kitty in the fight. Could they get hurt? Are they unhappy? Will this happen again?

Don’t worry, the good news is that there are plenty of ways to stop a cat fight, and prevent a cat fight happening in the first place.

Here’s everything you need to know about how to stop a cat fight:

Why Do Cats Fight?

One of the easiest ways to stop a cat fight is to understand why it is happening. Lots of times it is preventable, which is the ideal scenario for you and your cats.

The most common reason cats fight are: 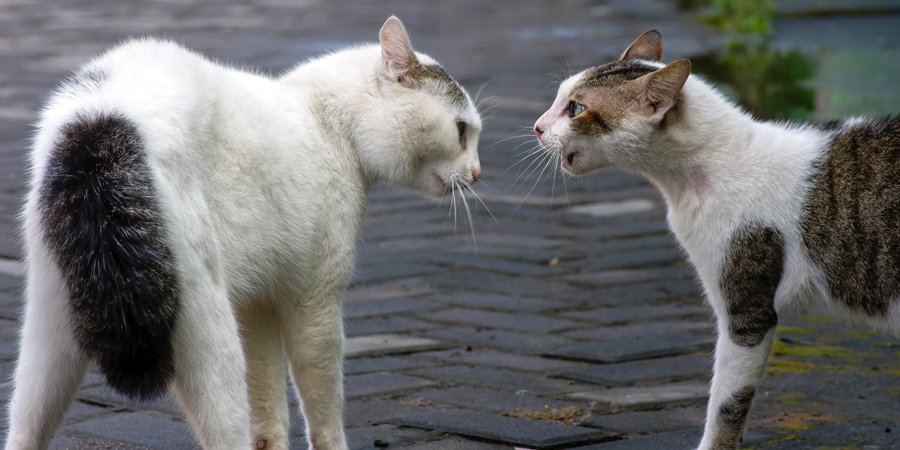 Cats are naturally territorial which means that once they have established what they believe their territory is, they will seek to defend that. You may have noticed in the home your cat rubs against you, furniture and even the walls. That is your cat marking their territory with their scent glands, which they have all over their body.

They do the same thing both inside and outside the house, so if another cat encroaches on that territory, you can be sure there will be trouble.

This means that your cat might fight with a new cat you introduce to the house, or even cats in the house they were previously OK with. Your cat may also fight with a cat who comes into your garden. Feral cats may also come into your cat’s space and fight with your cat, who hasn’t initiated the aggression.

If you see feral cats fighting outside yowling and screaming, that is likely to be a territorial fight

Any cat can be a naturally salty adorable sassy pants and boy cats are especially known for it. A cat might be aggressive because they are dominating another cat (this is especially common with male cats dominating female cats). Frustration can also come out like aggression, and a cat that is bored or frustrated may well take out their feelings on another cat in the house, or a random cat in your area. 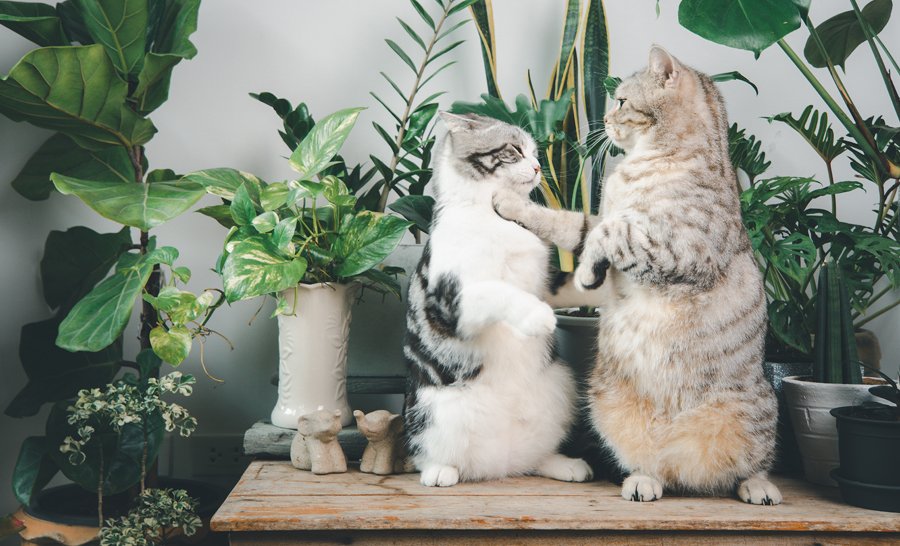 Sometimes playing rough can come across like aggression. A cat might hiss or kick, grab or even bite you or another cat. This is still rough play and isn’t aggression. It is at this point it is a good idea to simply distract your cats with toys or food if you can to seperate them safely. If the cat really grabs on, sticks its claws in and maybe screams, that is more than playing rough and it definitely a true fight or sign of aggression.

How To Prevent Cat Fights 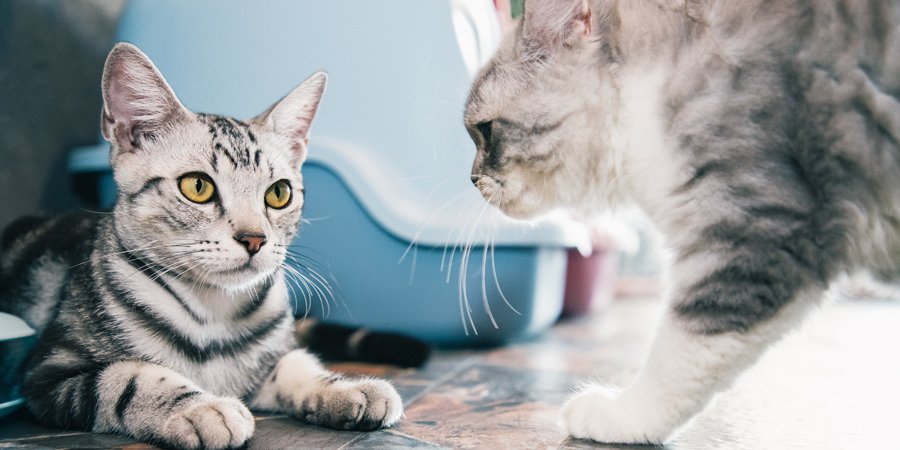 The secret to stopping a cat fight is below, but first, let’s take a quick look at how you can prevent cat fights. Preventing the fights in the first place will save a lot of stress, potential injury and drama for you and your pet.

If you are introducing a new cat, do it really slowly and carefully. This video has some great tips on getting that first introduction right. By introducing cats slowly you reduce the chance of conflict.

When you have cats that live together, you can reduce the chance of conflict by making space-sharing less stressful for them by:

Playing with your cat regularly, including a kicker toy or a way for them to ‘catch’ any prey is an essential way to let them release pent up frustration. Doing this stops frustration turning to anger, which can then be taken out on other pets or even on you during playtime.

If a pet has become aggressive recently and you don’t know why, it is worth getting them checked out at the vets. There could well be a medical issue causing them to lash out.

How To Stop A Cat Fight

Sometimes cat fights happen and so, you have two choices – try and stop it, or don’t. It is important to note that cats are vicious when they fight and there may be a time when intervening in any way is dangerous for you. This is particularly true if a cat is frightened and anybody that gets in the way of them protecting themselves may well get hurt.

If you are able to gently separate two cats fighting without getting hurt, it is OK to do so. If the cats are feral, it is probably not a good idea to do this because they can carry all kinds of diseases and they may be more likely to attack you in fear than your own cats.

If you can’t/ don’t want to physically intervene, the best option is to distract your cats away from their fight. A toy, a noise or even some food could be a good option. It is important to never ever punish your cats for fighting or scare them when they fight as this will only break your bond with them, and potentially make them more stressed or scared.

If the issue continues do consider a vet visit to rule out any medical issues. Do also look at enlisting an animal behaviourist to help, or consult some handy kitty socialisation videos and books, which could help you help your cat behave better with other cats.

If your cat is getting attacked by a feral cat in your yard regularly it is a good idea to keep your cat indoors permanently, or temporarily whilst you try to stop the other cat coming into your yard. You could try and find the ‘invader’ cat’s owner and ask if it can be prevented from coming to your yard. You could also try harness training your cat, so they become confident outside and other cats are unlikely to approach them because you are present.

When it comes to feral cats fighting in your garden, it will be a little bit more tricky to stop that happening. There are over 70 million feral cats in America alone, so they’re not going away anytime soon!

Using natural products that cats don’t like such as: lavender plants, citrus spray, orange peels, predator urine (usually bought online) and gravel/ mulch can be effective. You may also want to contact your local trap-neuter-release program to see if they can help prevent your local feral group getting any bigger.

Kitties at war is not what anybody wants. They are fluffy, cute, and innocent and as owners, we want them to stay that way, unharmed.

With your understanding, proactive measures, and calm approach you can prevent your kitties from getting into conflict for a peaceful, purrfect future.