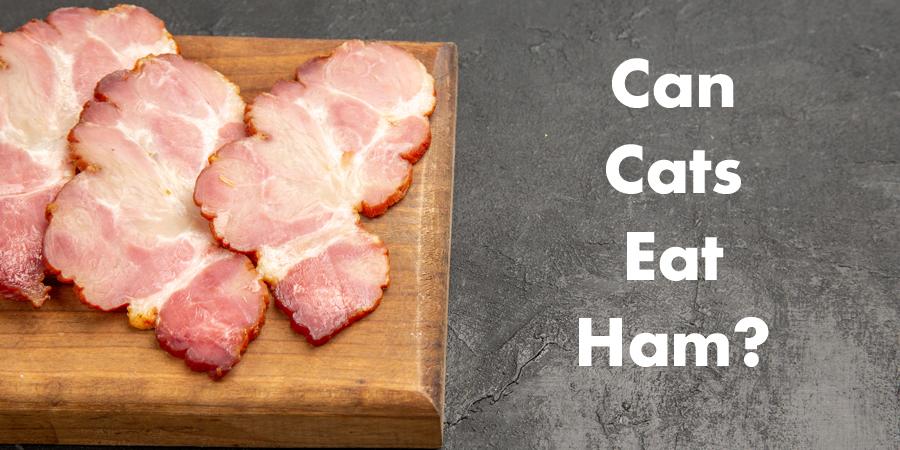 Ham is a popular American diet staple, with around 50% of sales being for half a ham, and nearly 20% for ham steaks and slices. Healthline tells us that ham is high in protein, low in fat and provides up to 76% of the daily human recommended amount of selenium. So, that’s great news on the human front so ham should be good for kitty too right?

You’re right to check if any human food is cat suitable because they are not made like us. They are biologically very different, and foods that we love, could be toxic to them. It really is better to be safe than sorry.

So, if you are wondering – can cats eat ham? This article has all the answers below:

Yes and no. Ham, if it is plain and unseasoned (just 100% ham) is not toxic for your cat in the case of one or two tiny cooked pieces as a rare treat. This is only if your cat is already in great condition, not if they have feline diabetes, like up to 2% of the feline population or if they are obese. In this instance any extra calories are a very bad idea for your cat.

Even if your cat is in great condition, ham is really not good for your cat either. It contains a lot more fat than lean meat like turkey, and it is also salty. It can also be cooked in a way that it is seasoned with ingredients toxic to cats, like garlic. If given to cats regularly, ham can cause high blood pressure and kidney problems.

How Much Ham Is OK For My Cat?

Realistically, in addition to the best cat food for their age, health and breed, you shouldn’t give them any ham at all. If you do, and it is prepared correctly (see below) it should only be a couple of pieces very rarely (once every few months) in tiny amounts and only if the cat is in great condition otherwise.

If your cat shows any signs of the ham causing them issues (this can happen with any new food) such as vomiting, being off their food, being tired or diarrhea seek quick attention from your vet.

How To Prepare Ham For A Cat

There are lots of different types of ham and not all of them are kitty suitable:

Ham slices tend to be extremely processed and so ideally, you won’t give any to your cat. They should especially be avoided if they contain any seasonings like garlic or herbs as they could be toxic to your cat.

Turkey ham, as long as it is free from any extra seasonings and flavourings is often better for your can than regular ham as it is a white, lean meat.

Deli ham is commonly made with seasonings so it is unlikely to be safe for your cat to eat. If you know your server well, though, and can confirm the ham is totally plain then it could be safe for kitty. In fact, some people feel deli ham is a better option for cats because it is likely to have less salt and fat than a whole cut of ham.

Honey won’t hurt your cat but it is very high in sugar, which could be problematic for your cat if given to them regularly. In addition to the ham itself, the combination is very unhealthy so – can cats eat honey ham? Not really.

Yes, plain cooked ham with no seasoning that has cooled and been cut into small pieces can be fed to your cat very, very occasionally. Can cats eat cold cut ham? If it is the same, plain, unseasoned ham then the same rules apply.

No. Raw ham can contain food borne diseases like listeria, toxoplasmosis and salmonella.

Ham For Cats? Yes, But Only Every Now And Again

As a general rule, any plain, cooked, cooled ham in tiny chunks free from extra seasoning like garlic or onion powder is OK for cats in tiny amounts very occasionally. Otherwise, healthy grain free cat food and complete cat foods is the best choice for your cat’s main diet.