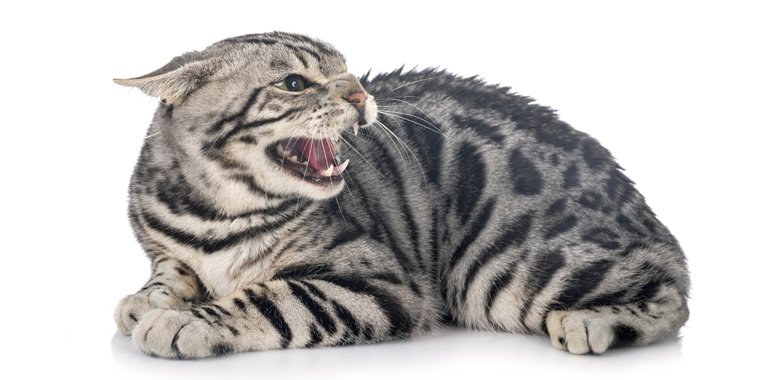 Why Do Cats Yowl and What Does It Mean?

There are some noises that cats make that are so cute with a capital C. Purrs, prrrts and meows are just some of them.

However, there’s one deep, guttural sound cats make that is anything but cute and that is the yowl. When it happens you may wonder if your cat has been possessed by the devil? Are they suddenly finding their baritone singing vibes? Why do cats yowl?

Let’s take a closer look at this other-worldly cat noise and why it comes out of your precious kitter:

A cat yowl is like a low, long moaning noise that a cat makes with their mouth open. It often sounds like the cats in this Youtube video. For some cats, it might be a higher pitched noise, like the cat in this Youtube video. It may be paired with the jaw opening and closing, licking of the lips, ear flattening, body lowering and strong eye contact, or obvious avoiding of eye contact. It may also be followed by a cat screaming.

Why Find Out Why Your Cat Is Yowling?

You may be OK with the yowling your cat is doing, and therefore you won’t feel a need to look into it any further.

However, it is important to know that cats make noises to communicate something. That something may not be anything to worry about, but it could also be something to address. By understanding why your cat is yowling, you get to know them better, which can only be a good thing.

In order to to find out the reason you have to be observant and do a little bit of detective work.

Why Do Cats Yowl?

There are lots of reasons that a cat might yowl, lets take a look at some of them:

Some cats fuss around your legs when they are hungry, or maybe meow at your feet. Some cats though, are actual foghorns. They will do anything short of flying a plane above your house with a sign saying ‘FEED ME NOW’. These are the cats that will yowl to say they are literally starving to death because of your neglect (their bowl is probably half full of food).

Something They Don’t Want Around

Maybe another cat has come into your garden, or maybe a cat from your household has overstepped the mark. A dog might have even come to sniff and say hi. If your cat is not happy about the presence of this person or animal, they may yowl to let everybody know how they feel.

Something They Don’t Want You To Do

If your cat is covered in poop they may need a bath, and they may yowl to let you know that they are not cool with it. Maybe they are at the vets having a temperature check up the butt – again if they don’t like that, they won’t be shy to talk about it with a yowl.

Cats can yowl when they are in pain. They might go very small and shy in behaviour, but if you go near the place of pain on their body, yowling may occur to let you know it hurts.

Female cats might yowl to let other cats know they want to mate. The males might yowl outside the house of a female in heat to show their desire for mating. When mating commences yowling is unlikely to occur, and instead will be replaced with kitty screaming, the females response to the barbs on a male kitties penis.

Angry cats may well yowl in rage. This anger can be caused by anything from pain, frustration after playtime, to the presence of a new pet in the house. You would need to investigate this kind of behaviour further to check the issue, particularly if it is new behaviour for your cat.

If you wonder why do older cats yowl? Age could well be the reason. Kitties can get dementia just like older humans, and it can show in them yowling as they struggle to understand what is going around them.

What To Do About Your Cats Yowling

If your cats yowling seems to just be a harmless expression of their personality, you really don’t need to do anything. They’re a bit of a loud mouth and that’s just fine.

Of course, if the yowling is new or linked to disruptive or unusual behaviour, you need to do a bit more investigating. The priority for you has to be ensuring your cat is not hurt or in pain. You may want to get them to a vet at speed if they are yowling and:

If you are at all concerned you need to contact your vet to rule out illness or injury.

If your cat is yowling because they are not neutered it is a good idea to have them neutered. Around 3.2 million cats enter animal shelters in the USA annually – the world really doesn’t need extra kittens. This should stop yowling associated with breeding behaviour.

If it is a behavioural issue causing the yowling then you may wish to check out Jackson Galaxies Youtube which has a ton of tips on cat behaviours and training.

“In ancient times cats were worshipped as gods; they have not forgotten this.” – Terry Pratchett

A cat yowling is not a treat for the ears that is for sure. As long as it’s not causing a problem for you, or it isn’t because they are in pain, it’s definitely just something to get used to.

Why not try yowling with your cat just to cement that bond? Who knows, you might just become the next big double act in music. We can’t wait to hear the album!